After a longish period on not baking due to illness, I have just started baking again but my starter seems to have become very lazy!

I did think of starting a new starter altogether, but decided to give the existing one a last chance. So I ditched half of it and gave it a good feed yesterday, then did the same again today. It looks pretty lively now: 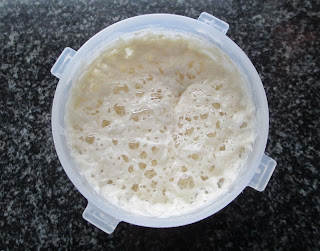 So I'm going to get up early tomorrow morning and start a new loaf with it.

For a change I made a loaf during the day (i.e. without a long first rise overnight).

After four hours the dough had about doubled in size, so I knocked it back, stretched and folded and shaped it for the Lekue.

After four hours the dough had risen but not as much as I expected. I went ahead and baked from cold and the bread was just about OK, but not up to the best standard, so I started a new batch of starter.

I began with a small cup of flour and one of water, and added the same each day for four days, then just a cup of flour on the fifth day as it was a bit runny. It was looking OK after that so I baked a basic loaf in a loaf tin. It hadn't risen as much as I had hoped after 4 hours but I went ahead and baked it from cold anyway. 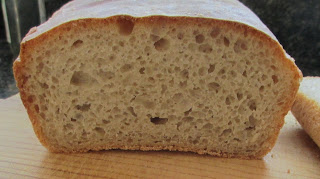 It had a nice crisp crust but I didn't get a chance to use it until today but once sliced it looked pretty good, with a nice open crumb. But still a bit compacted at the base of the loaf.

I'll give it a longer second rise next time.

Meaanwhile I will stick with my new starter now and throw away the old one.