There are many different methods for making sourdough bread and the following are some of the variations to the basic method that I have tried out:

Long First Rise
It does develop the sourdough flavour, but it also increases the overall time and there is another alternative (see sponge method later). If you want to try the long first rise, make the dough and knead it as usual. Then put it in a lightly oiled bowl, cover with cling film and leave it to prove in a cool place for six to eight hours (or overnight). At the end of this time is should be roughly doubled in size. Knock the dough back, shape the loaf and carry on as usual.

Long Second Rise
Make the dough, knead and prove as for the basic method (or long first rise).  When it has roughly doubled in size, tip the dough onto a lightly floured work surface, knock it back and knead it briefly.  Work the dough into the required shape, cover with a sheet of lightly oiled cling film and leave in a cool place for six to eight hours, until doubled in size, then bake as normal.

Single Rise
The basic reason for knocking back the proven dough is to remove large bubbles and get a more even crumb. But one of the delights of sourdough bread is an uneven crumb so simply don’t bother with a second rise.

Stretch and Fold
This method combines kneading with a single rise. Make the dough as for the basic method but, instead of stretching and rolling, gently stretch the dough into a 20cm to 30cm square. Now fold one side in about one third of the way. Then fold the other side in to overlap the first and form a long rectangle. Then fold in the two ends of the rectangle a third of the way to create a square. The aim is to trap air, so be gentle.

Turn the dough over, smooth it into a rough ball and put it back in the bowl. Cover with cling film and leave it in a warm place for 20 minutes. Then repeat this stretching, folding and resting process twice more. After the third rest, gently form the dough into your final loaf shape then leave it for a final 40 to 60 minutes (until doubled in size) before baking as normal.

Sponge Method
Sponge refers to a preparatory mix of half of the flour with all of the water and starter. Prepare the sponge in a mixing bowl, cover with cling film and leave to prove in a cool place for six to eight hours. Then add the remaining flour and salt and continue as usual. This is effectively a long first raise.

Refrigeration
One of the problems with using the long second proof is the danger of the dough rising too much and then collapsing back on itself (a very sad sight). It is a particular problem in warmer climates but this method overcomes that risk. It is similar to a long second proof but, by putting the dough in the fridge overnight (or all day), it slows the rise down. Then bring the dough out of the fridge and allow it to come up to room temperature for an hour or so to finish rising and bake as normal.  Alternatively take the dough straight out of the fridge and follow the bake from cold method (below).

Bake from Cold
Instead of pre-heating the oven, bake from cold. Once the dough is nearly doubled in size but not fully risen (which reduces the rise time by about an hour) put it into a cold oven and bake as usual but add the time it takes the oven to get up to heat to the bake time. In my oven, which is an electric fan oven, this only takes five minutes, but all ovens vary so time it exactly the first time and then simply add the time to the baking time.

Sponge Method (I leave it to prove overnight in the kitchen).

Single Rise in a warm place (I use the oven with the light on).

Bake from Cold (which reduces the single rise time to around two and a half hours).

There are many different recipes and methods for sourdough bread but let’s start with the basics. This is a simple basic recipe for producing sourdough bread which uses the same process as making bread with commercial yeast and will produce a quite acceptable loaf.
These quantities will produce a 660g (about a 1½lb) loaf:

Put the flour and salt into a mixing bowl and mix them together.

Put the water and sourdough starter into a measuring jug and mix them together.

Once you have produced the dough in the mixing bowl, turn it out onto a lightly floured surface. You may find a plastic dough scraper useful for getting all the dough out as some tends to stick to the sides of the bowl.

Knead the dough by first stretching it out into a long strand: 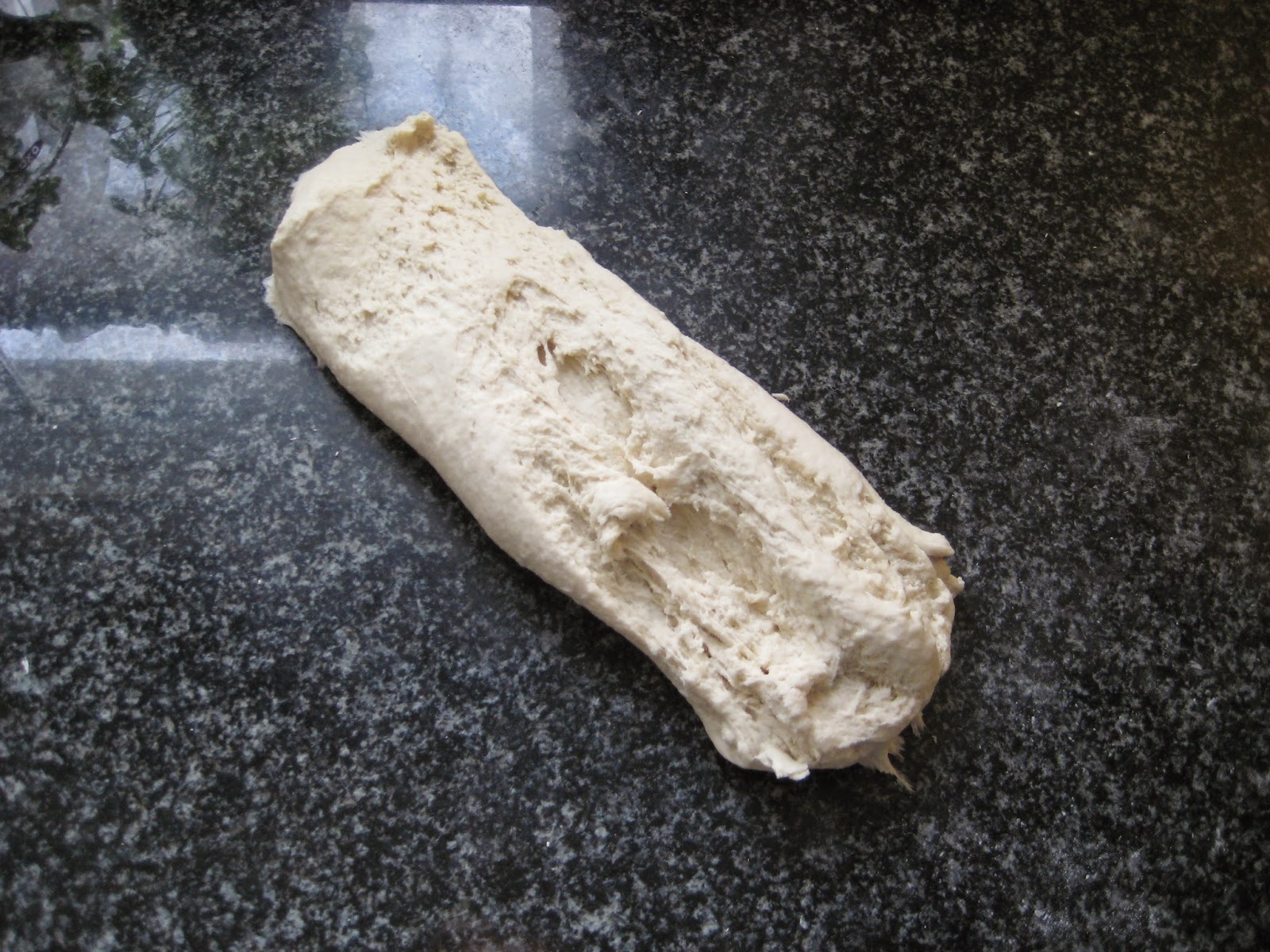 Then roll it back into a ball. Continue this process, stretching in a different direction each time.

After around 10 minutes the dough should feel smooth and satiny.

Form the dough into a ball and put it into a lightly oiled bowl.  Cover the bowl with cling film and leave it to prove in a warm place for two to four hours until roughly doubled in size. If you live in a warm country the kitchen will probably be fine, if not a warm airing cupboard should be fine or put it in the oven with just the oven light on (which is what I do as I was told off for getting flour on the clothes in the airing cupboard).

You won't notice as much of a rise in the dough as you would with a yeasted bread which is why it will take longer. The warmer the temperature the quicker the rise, so the first time check it every hour and once it is roughly doubled in size you are ready for the next step.

Once the dough is roughly doubled in size, turn it out onto a lightly floured surface to knock it back and shape it.

Knocking back consists of punching the dough gently to get rid of the gas in it and rolling it back into a ball. It should be roughly back to its original size following this.

Shaping the dough consists of rolling it into the required shape for your baking sheet or bread tin. 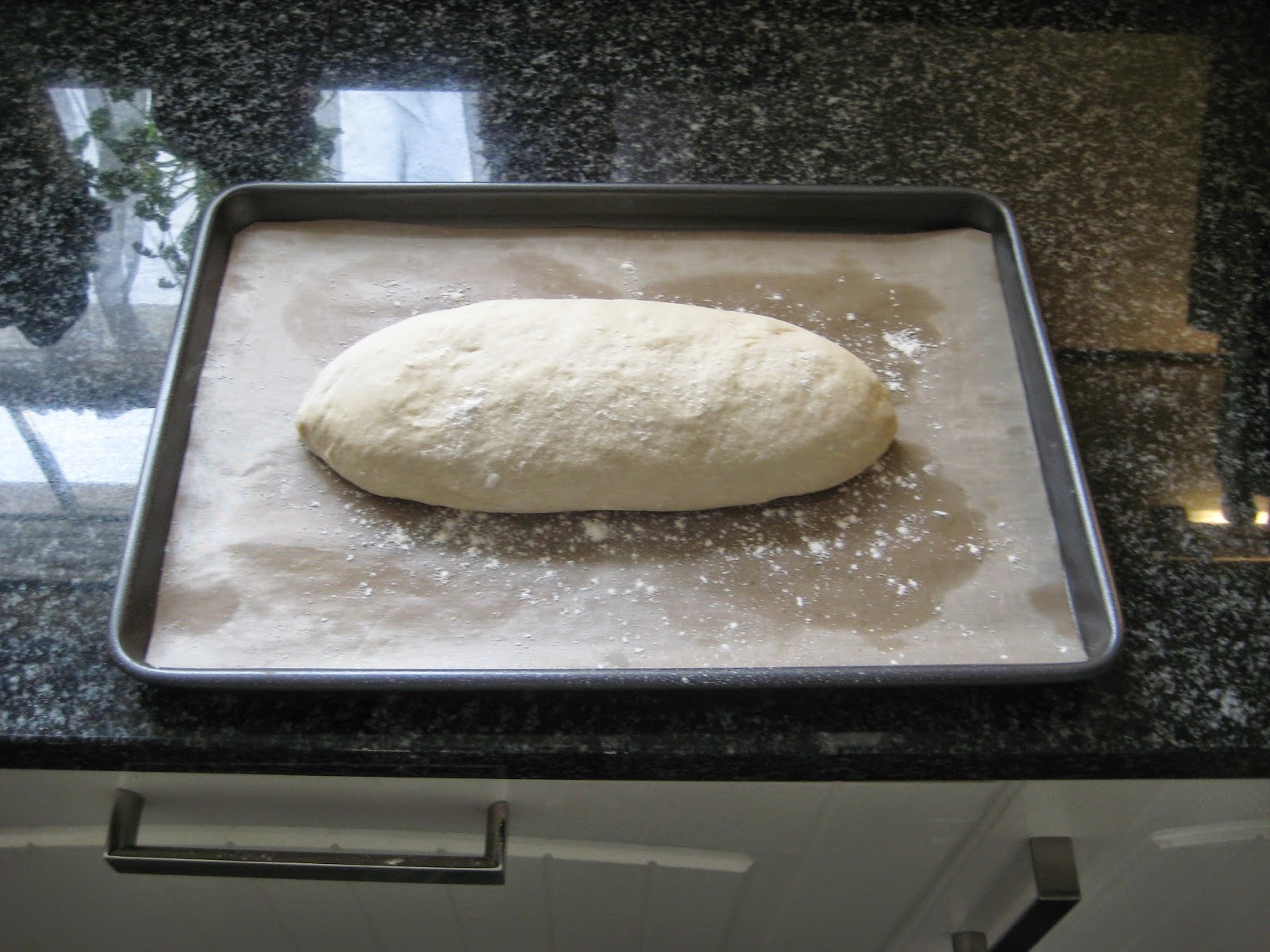 Place the shaped dough on the baking sheet or in the bread tin and sprinkle the top with flour.

Cover with a clean tea towel and leave it to prove in a warm place for a further two to four hours until it is again roughly doubled in size again.

Using a sharp bread knife, score the top of the loaf. This is referred to as the baker’s signature and can be any pattern you like. The purpose is to allow the top of the crust to expand without splitting when it goes into the hot oven (called the oven spring).

Bake for 35-40 minutes or until a good golden crust has formed and the loaf sounds hollow when tapped on the base.

Note: baking time will vary from oven to oven, so be prepared to shorten or lengthen the baking time as required. When the loaf is perfect, make a note of the time and use that in future.

Turn the oven off and leave the loaf in the cooling oven, with the oven door slightly open (to get rid of any remaining steam), for a further 5 minutes.

Then remove the loaf from the oven and put it on a rack to cool for at least an hour. This is sometimes hard to do as the smell of the fresh baked bread is wonderful but it is better for the bread to let it cool down before cutting it. 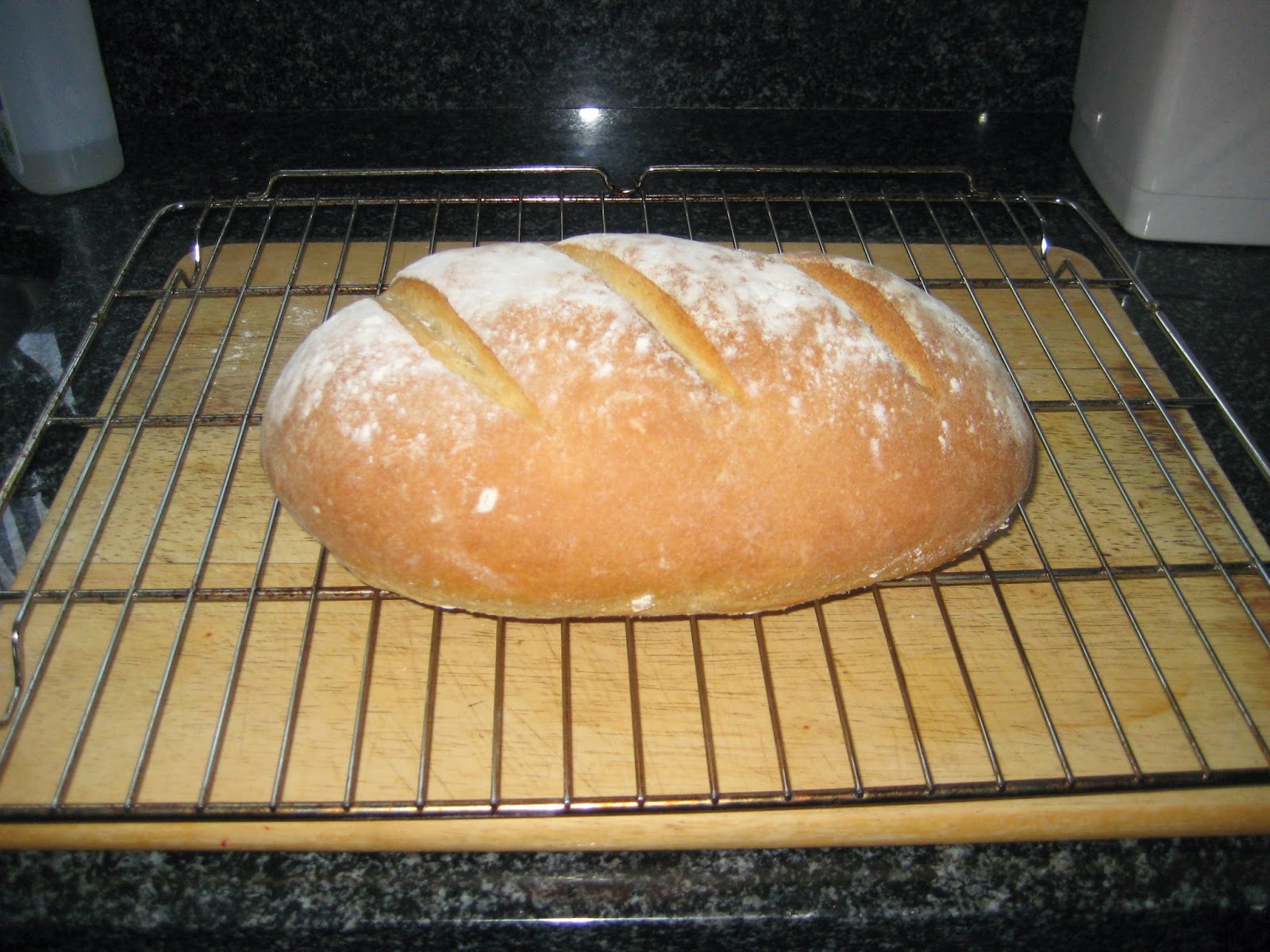